I have breastfed forever... over 75 months and counting. If you think for one second that I have completed this momentous milestone without wine, then you do not know me at all. Another hypothetical question: How you think I keep getting pregnant? (although, there was a 'snip' after baby #5!)

Can You Have a Drink While Breastfeeding?

I’ll start with my opinion, if you didn’t gather as much from above, and I’ll follow it with all the facts. After several babies, you learn to lighten up. You also learn how to research so that you feel confident in your choices. I completely understand that drinking and breastfeeding is a hot topic that many will judge me (and you) for taking part. But here’s the deal: They can judge away.

Science supports a few drinks, as do some of the top breastfeeding gurus. Let them all be judge-y and pissy; we’ll be over here smiling with our wine glasses full! I enjoy 2 glasses of wine with my husband in the evening (with dinner and afterward). It’s not every night, but it is often. We also may enjoy a 3rd glass on a weekend night every once in a while. We aren’t ones to become intoxicated – as we bedshare with our children, and we would never fall asleep in unsafe conditions. We are responsible. When breastfeeding, I tend to nurse as I am having a drink, that way the alcohol has been completely metabolized before the next nursing session. That being said, there are plenty of times I have nursed after having a drink as well.

You do not need to stop breast-feeding because of moderate alcohol intake. 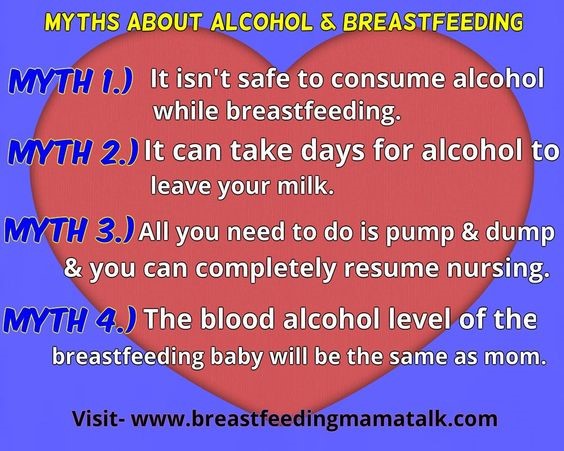 Less than 2% of the alcohol consumed by the mother reaches her blood and milk. Alcohol peaks in mom’s blood and milk approximately 30-60 minutes after drinking (but there is considerable variation from person to person, depending upon how much food was eaten in the same time period, mom’s body weight and percentage of body fat, etc.). Alcohol does not accumulate in breastmilk. The following pictures show you how alcohol enters the blood and the breastmilk, but is broken down by the body and pulled from the breastmilk. (Photos found on MOmaha.com) 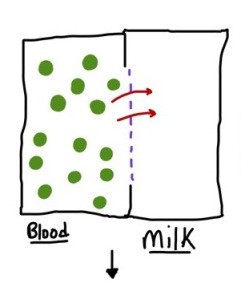 The left is the bloodstream and the right is the breast milk. The opening between the two containers (the barrier between mother’s blood and babies milk) is semi-permeable, meaning that some things can pass through but others can’t (like a screen door – it lets fresh air in but keeps squirrels out). Alcohol (represented by the green dots) does pass through this membrane, so alcohol molecules do get into breast milk. BUT: there is an important process that takes place as alcohol enters the bloodstream. 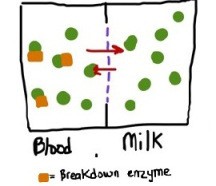 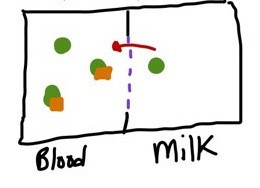 The following is from a blog by a mother who tested her milk for alcohol. Not one of those useless kits that you can buy at various stores, but tested at a toxicology laboratory.

One study found mom’s blood alcohol level had to be three times the legal limit before significant infant side effects occur. Definitely don’t go trying that at home.

Side effects of acute infant exposure to alcohol (translation: heavy drinking breastfeeding mom) include: sleepiness, weakness, and poor sucking. Side effects are worsened with very young infants whose livers do not metabolize alcohol as quickly!

The official recommendations on drinking alcohol and breastfeeding

The AAP says that alcohol use while breastfeeding is usually compatible.

Dr. Jack Newman in his handout “More Breastfeeding Myths” has said: Reasonable alcohol intake should not be discouraged at all. As is the case with most drugs, very little alcohol comes out in the milk. The mother can take some alcohol and continue breastfeeding as she normally does. Prohibiting alcohol is another way we make life unnecessarily restrictive for nursing mothers.

The La Leche League’s recommendation as taken from their book – The Womanly Art Of Breastfeeding: The effects of alcohol on the breastfeeding baby are directly related to the amount the mother ingests. When the breastfeeding mother drinks occasionally or limits her consumption to one drink or less per day, the amount of alcohol her baby receives has not been proven to be harmful.

Thomas W. Hale, R.Ph. Ph.D. “mothers who ingest alcohol in moderate amounts can generally return to breastfeeding as soon as they feel neurologically normal.” A mother’s blood alcohol level must be 300mg/dl before significant side effects are noticed in the infant.

A recent research study found that “the amount of alcohol presented to nursing infants through breast milk is approximately 5–6% of the weight-adjusted maternal dose, and even in a theoretical case of binge drinking, the children would not be subjected to clinically relevant amounts of alcohol. In conclusion, special recommendations aimed at lactating women are not warranted. Instead, lactating women should simply follow standard recommendations on alcohol consumption.

So CHEERS to all the breastfeeding mamas who are enjoying a glass of wine tonight!